Sky Captain And The World of Tomorrow Wiki
Register
Don't have an account?
Sign In
Advertisement
in: Characters 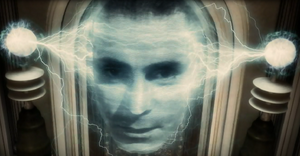 Dr. Totenkopf is a scientist who was the leader of Einheit Elf. Totenkopf came to believed that humankind was doomed to extinction and build a vessel that would carry the building blocks of a new civilization into space.

Totenkopf was awarded his first patent when he was years 12 old. By 17 he had already received two doctorates and was one of the most highly regarded minds of his day.